Third in the energy sector is the electricity generation and distribution industry, but in importance to the economy as a whole, it is critical for the operation and development of all industries and commerce. Kazakhstan has 76 power stations, of which five are hydro-electric. More than 85% of electricity generation is under private ownership, but the electricity distribution network is controlled by state-owned KEGOC (Kazakhstan Energy Grid Operating Company). The total installed capacity of power plants in Kazakhstan is 20,591 MW, with the largest production in Pavlodar and Karaganda regions. Large power generators include ECE, Ekibastuz-GRES-1 and GRES-2, owned by the Kazakhmys Corporation; the major heat producers include ENRC’s subsidiary Aluminium of Kazakhstan, ArcelorMittal Temirtau, and Karaganda Zhylu. The Integrated Power Systems network between Russia, Kazakhstan and Central Asian states such as Kyrgyzstan, Turkmenistan, Tajikistan was created in 2002. Major investment projects within Kazakhstan include a second power transmission line North South, runnin,000km between power stations in the north of the country to the south.

Kazakhstan is the focus of attention from international players in the renewable energy market, and the Government welcomes foreign investment in green energy projects. Wind, solar, biogas, biofuel and small hydro projects are all eligible for feed-in tariffs, and there is a stable legislative framework for such investments. There will be an estimated US$2 billion invested in renewables by 2020. 10-15% of the land in Kazakhstan has average wind speeds of over 6 ms making this ideal territory for wind farms; one of the country’s power companies, Samruk-Energy, is building a wind farm that is forecast to produce 172 million kilowatt hours of electrical energy per year. The 3,000 hours of sunlight a year in Kazakhstan has the potential to produce 2.5 billion kilowatts a year. Future Energy was the theme of EXPO 2017, hosted by Kazakhstan in the capital, Nur-Sultan.

The EXPO 2017 is going to be a global event given visitor numbers and its economic and international influence. Initiated by President Nazarbayev, Kazakhstan’s bid to host the 2017 EXPO at the 2012 General Assembly of the International Exhibitions Bureau (BIE) was announced as the winning bid, supported by 103 countries. Kazakhstan is the first member of the CIS, and the first country in Central Asia, to host EXPO.
EXPO 2017, with the theme Future Energy, will run from 10 June to 10 September 2017 in the capital city, Astana. Around 100 countries are expected to take part, and at least two million visitors expected during the three months of the event.
The Astana EXPO will showcase the best energy-saving technologies in the world, new developments, and innovation in production from existing alternative energy sources such as solar, wind, marine, ocean and thermal waters.
The event will also provoke much debate about the future of humanity and our environment, since energy is so much at the heart of our species’ development. Discovering how to make fire – creating energy from raw materials around us – was one of the critical points of human development that separated us from all other species on the Earth, and was the ‘big bang’ moment of technological development for Homo sapiens.
The Future Energy event sets specific goals – to explore strategies, programmes and technologies aimed at the development of sustainable energy sources, improving the reliability and efficiency of energy supply, to promote the use of renewable energy sources and to show everyone the need for their active participation in the project to save energy and learn new ways to use valuable energy resources.
For Kazakhstan, Expo 2017 will give a powerful impetus to economic diversification, technological upgrading of production facilities, and the scientific base of the country.
Kazakhstan is one of the richest nations in terms of energy-producing raw materials, and much of its recent history has been created on the back of energy production, directly and indirectly. In the 21st century, however, one of the great challenges facing humanity is the safety of our environment, our own health and that of the species that share the planet, and to reconcile those pressing needs with social and economic development. Kazakhstan is fully aware of the imperative to find new ways of powering the human race, which mean lessening dependence on hydrocarbons and precious earth resources, so the race towards Future Energy has as high a priority here as anywhere.
EXPO 2017 will bring swarms of visitors from different cultures all over the world to Astana; each country taking part will create a unique pavilion that expresses its national identity and culture, which will showcase the very best of its vision and achievement.
The creation, management and aftermath of EXPO 2017 gives a massive range of opportunities for small and medium sized businesses, with the event attracting significant investment and opening up huge potential for innovative enterprise.
Alongside the commercial, scientific and technological exhibits, however, is the entertainment. Theatre, music, art, food, design, philosophy, sport – every day will bring hundreds of shows, displays, demonstrations and interactive events to enthuse and entrance visitors. And, of course, there will be plenty of retail therapy available.
If anyone can find a way to harness the energy produced by the enthusiasm and excitement of visitors and exhibitors, the human-kilowatts might power EXPO for several years…

Once EXPO 2017 ends, the work will continue. Work is now proceeding to prepare for the establishment, on the premises of EXPO, of an international centre for the development of green technologies and investment projects under the auspices of the UN, as proposed by President Nazarbayev in September 2015.
At Nazarbayev University, the EXPO Centre’s neighbour in Astana, a new Centre for Energy Studies will take the development of Future Energy onwards.
Already, the forecast for inward investment in the renewable energy sector is over two billion dollars by 2020; with EXPO 2017 the investment level is set to rise.
There are plans to build 13 wind plants, 14 hydroplants and four solar plants, and for the country to recycle a third of its waste to energy generation.
The largest solar power station in Kyzylorda province will be capable of generating 65 megawatt hours of electricity a year, and the first commercial wind farm in Akmola province could generate 172 million kilowatts of electricity a year, saving more than 60 milion tons of coal. Wind farms – because of the geography of the country, with its vast steppe – have the potential to produce 25 times more energy per year than Kazakhstan’s current production from hydrocarbons. Around 10-15% of the land has average wind speeds of over six meters per second, making Kazakhstan a prime candidate for wind energy. Solar energy potential is also enormous, with around 3,000 hours of sunlight per year generating a possible 2.5 billion kilowatts.
Offsetting existing energy emissions, Kazakhstan’s emissions trading system is the first in the CIS.

Expo 2017 Centre is on the south side of Astana, near the Nazarbayev University campus and two kilometres from the airport. The main site is 174 hectares and another 150 hectares for retail and entertainment, transport, services and accommodation. The whole complex will be powered largely by green energy.
The design and creation of the Expo site has been awarded to Chicago-based partnership Adrian Smith+Gordon Gill Architecture, after a competition in which fifty world-class architects submitted proposals. AS+GG emerged as the winners from a shortlist of superb applications. President Nazarbaev said: “This development will change the city’s image. I got acquainted with all projects offered by 50 participants of the competition. We selected 10 best projects and then chose the Adrian Smith+Gordon Gill Architecture company. The winner has experience not only in the field of construction but also in the sphere of green economy.”
AS+GG’s entire design is based on the Future Energy concept with energy provided from renewable sources: buildings will be power generators and the transport infrastructure will encourage the use of ‘green’ vehicles.
The architects said of the project: “Phase 1, or the ‘Expo Mode,’ will see the design and construction of the exposition buildings including the central Kazakhstan Pavilion; Theme, Corporate and International Pavilions; as well as hotel, retail, art and performance spaces. The first phase will also include the design and construction of a series of buildings that will act as a ‘covered city’, which will include retail, residential and office spaces. Phase 1 will be completed by June 2017 to serve the Expo and its visitors.”
The centerpiece of Expo 2017 will be the iconic Kazakhstan National Pavilion, in what will be the world’s largest globe – 80m in diameter. Around it winds the Energy Hall, and outside that is the semicircle of pavilions: international, corporate and thematic, which take up around 42% of the total space.
Underground exhibit storage, offices and restaurants are included in the design for the pavilions; hotel and apartment complexes will be built in the northern and western parts of the EXPO village to accommodate guests and exhibitors.
The President added: “Implementation of this project is a great responsibility for us. We will invite not only two million visitors but demonstrate the use of high technologies in the construction. The EXPO Centre will promote Astana worldwide, and the in the future the Centre will become one of the favourite venues for residents and visitors of the capital city.”
The Expo site has a future way beyond the three months of the event, as architects AS+GG explain: “Phase 2 or the ‘Legacy Mode’ will finalize the first Third Industrial Revolution community. The Expo buildings will be converted into an office and research park, attracting international companies and entrepreneurs. Expo parking and service zones will be transformed into thriving and first class integrated neighborhoods including an additional 700 residential units, as well as office, hotels, local markets, and civic and educational facilities.”
Of course, the plans for 2017 are not confined to the Expo Centre itself, but affect the whole city of Astana. New hotels, residential developments, shopping centres, office buildings, leisure facilities and utility infrastructure is all underway. aside from the new light rail rapid transit system connecting the Expo Centre to the city, the whole transport infrastructure is being substantially upgraded: the new railway station will cope with 35,000 travellers per day, two new bus stations will each have capacity for 5,000 passengers, and there will be a major extension to the airport. Landscaping throughout the city will include walkways and bicycle paths, and substantial new parks and green spaces. The plan is to turn Astana into an eco-city, harmonizing urbanization with nature, creating a comfortable environment for residents and visitors, while increasing and conserving biodiversity.

The Global Energy Environmental Strategy is a long-term program for moving to sustainable development based on conflict-free energy supply of all countries without damage to the environment. It provides for acceptance of unified norms and standards in energy production and consumption as well as global financial mechanism for support of sustainable energy supply.

The Global Energy Environmental Strategy is a long-term program for moving to sustainable development based on conflict-free energy supply of all countries without damage to the environment. It provides for acceptance of unified norms and standards in energy production and consumption as well as global financial mechanism for support of sustainable energy supply. 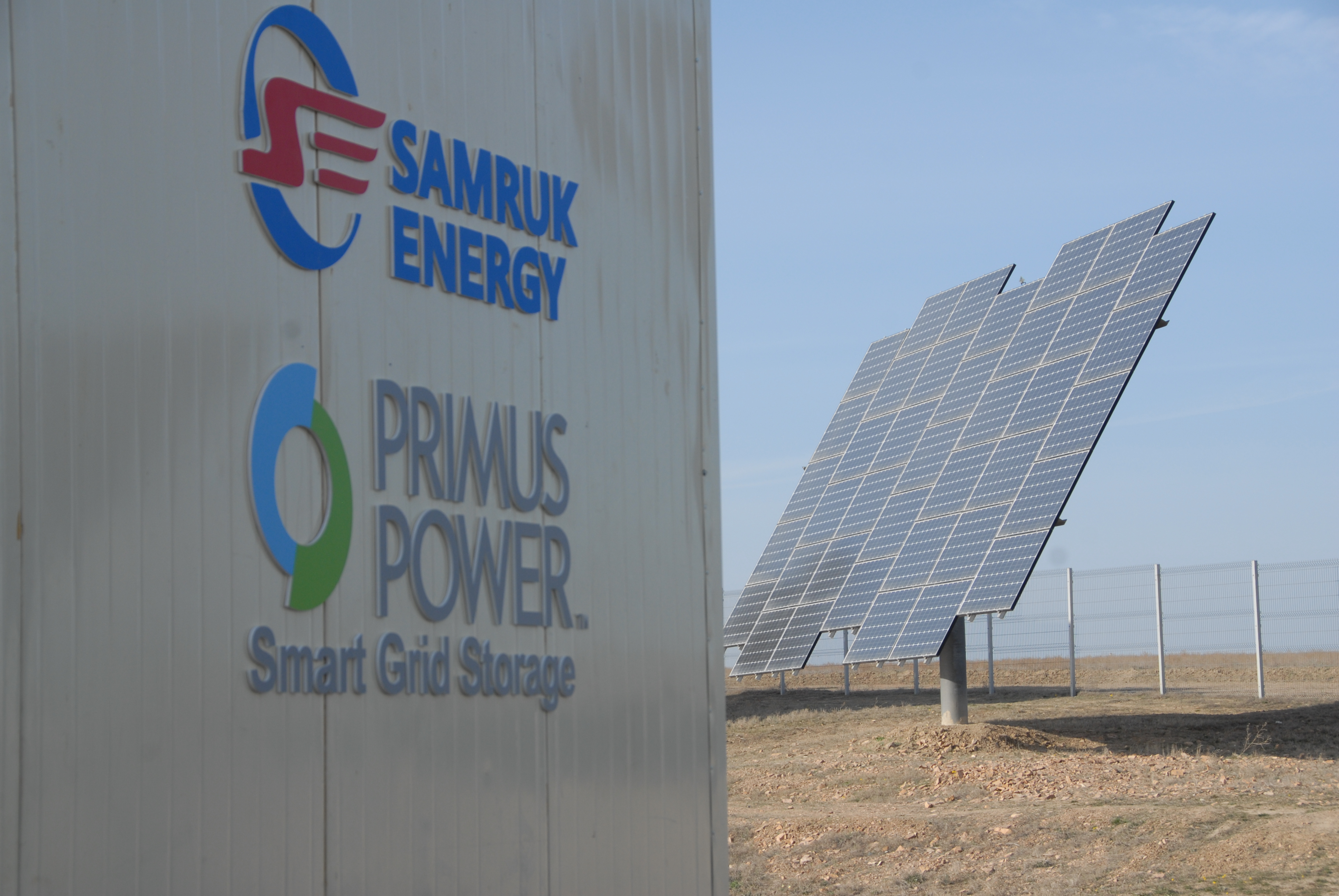 The Republic of Kazakhstan has made substantial progress in regulatory reform in support of its Green Economy Concept, including developing the Kazakh Emissions Trading Scheme (K-ETS) as well as energy efficiency and renewable energy policies. With the support of the European Bank for Reconstruction and Development (EBRD), Kazakhstan also submitted in September 2015 its Nationally Determined Contribution (NDC) to the UNFCCC. Kazakhstan has signed the Paris Agreement on climate change in August 2016 and ratified it in December 2016. The Astana International Financial Centre (AIFC) has requested the EBRD to provide assistance in relation to the conceptualisation and development of a Green Financial System. Kazakhstan aspires to become a regional hub for green finance. The Green Financial System would provide further support for the investments in Kazakhstan’s green economy. The request comes against a context of limited involvement of Kazakhstan’s financial sector in the development of the green economy, despite the huge potential for growth in the green investments space. Furthermore the financial sector can play an important role in providing services for the emerging green markets, such as the Kazakh Emissions Trading Scheme.